The X-252 Shuttle is meant for people who love a good adrenalin rush, and it’s definitely not for the timid. 3D stunt flying is akin to riding a motorcycle, but without as much physical danger. It takes a certain kind of person to want to fly an aircraft upside down and backwards. And I am that kind of person.

There are a lot of drones out there that can do a flip at the press of a button; this is not one of those aircraft. Those are preprogrammed stunts that look cool, but take no skill to perform. The X-252 Shuttle is more like a collective pitch RC helicopter. When you want to fly upside down you have to use negative pitch and skill. It’s a lot more difficult, but it also offers a lot more freedom.

Inverted negative pitch quad rotor flight works like this: when the throttle stick moves above 50% the blades spin in the normal direction, and when the throttle stick moves below 50% they spin in the opposite direction. The rotors are symmetrical so they generate the same amount of lift no matter which direction they are spinning. When you want to fly upside down, you roll the helicopter over until it is upside down, and you pull the throttle from positive thrust to negative thrust at the same time. It takes practice and your timing needs to be precise, but with practice it’s not as hard as you might think. Inverted flight isn’t the only stunt you can pull off. You can do loops, barrel rolls, axial rolls, spinning flips, tick tocks, and more.

XK has produced a number of true 3D-capable aircraft, including the smaller brushed XK X 100 quad rotor, and the AS350 collective pitch scale RC helicopter.

The XK X252 uses four brushless motors, and it is very light for its size, so it has enough power for you to get your 3D on. I was finally able to do some spinning flips, or pirouette flips as they are known in the R/C helicopter world, and I was surprisingly able to do some limited tick tocks as well.

This aircraft uses brushless reversible motors with reversible symmetric props so they can stop spinning clockwise and start spinning counter clockwise in an instant. It also has an onboard FPV camera with a built-in digital video recorder.

The onboard camera records a very nice high quality video stream to the micro SD card; however the video signal that it broadcasts to the included FPV monitor had a few issues. Mine was an “early press sample for review” so it may have just had a defective video transmitter. It also came with a broken headlight, so who knows? My video stream would freeze and lag every five seconds, so it made FPV flight all but impossible.

I didn’t have any range issues with the included branded XK transmitter, and the FPV video range was not bad, even if it lagged every five seconds.

The rotor arms are tilted slightly up and the body is sculpted with details and curves that are smooth and pleasant. The lights, brushless motors, battery and landing pads are all nicely integrated into the aircraft frame; it’s smooth and aerodynamic, but not flashy.

The overall design is reminiscent of a less technically advanced aircraft than it truly is.

It doesn’t necessarily look like a $250 aircraft, but it definitely flies like one and that’s what counts. It has a two-part plastic outer canopy that is very light and durable, and overall it’s a solid and well designed aircraft.

The custom built battery is designed to slide into the back of the aircraft like a smart battery. Fortunately it comes with an adaptor that allows you to use any standard battery charger instead of forcing you to use a proprietary one.

XK doesn’t just slap their aircraft together; they try to think of everything a pilot might want or need, and I honestly think they polish their aircraft more than a lot of companies do.

This aircraft is durable enough to handle a few crashes and dings without damage, but 3D flight is for experienced pilots. Flying 3D is something that should only be attempted by trained pilots. If you don’t know how to do it you will crash, and probably pretty hard, like full throttle into the ground hard.

It took me about three months of training on a simulator before I could fly a helicopter upside down with confidence. Once I got to that point I could really have some fun.

All you have to do is install the rotors and slap the FPV monitor onto the transmitter and you’re ready to go.

The manual mentions that the throttle and pitch curves can be programmed, but there is no visible USB port on the aircraft so reprogramming would probably need to take place using the transmitter. I don’t know about reprogramming the flight controller but if it is possible you would need to disassemble the aircraft first.

Out of the box it feels smooth and easy to control. It has a good stable hover, good speed, and great reaction time. It’s a very well programmed aircraft.

In 3D flight mode it is fully exponential and it gives you the ability to use negative pitch to flip, roll and fly upside down to your heart’s content.

There are no preprogrammed stunts like push button flips or follow me modes, so it’s all up to the pilot to show off his skills.

The included transmitter gets great range and has a number of nice built-in features: your standard throttle hold switch, idle up switch, and mode switch. The big red button is for starting and stopping the video recording.

The video that was recorded by the onboard camera looked pretty good. It was 720 x 480, and it handles low light pretty well. The video that was transmitted to the video monitor on the other hand would lag every five seconds, but when it didn’t lag it looked good and smooth. I think the lag was more of a problem with my test unit as opposed to an overall design flaw, but since I didn’t get a response from XK when I asked about it I can’t say for sure. 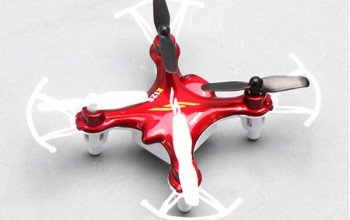 I love this aircraft. I’m an old school 3D helicopter pilot and the XK X-252 Shuttle gives me the ability to do some hardcore 3D flight and practice my craft without the worry of totaling my aircraft in a crash. If you want to see what 3D flying is all about, look up Alan Szabo Jr. and watch a few of his videos. You’ll see helicopters do things that you never knew they could do. He flies giant $1000 death machines, but if you want to give 3D flight a try without all the danger and expense, definitely check out the XK X-252 Shuttle—it’s worth it.
6