You can buy all sorts of drones these days, from racers to machines capable of producing professional video. But if you need an aircraft that can film high quality videos and be competitive in a race, then the Hornet-S from JYU is right up your alley. This aircraft is packed with more features than you can shake a stick at and it’s not a bad deal. You can pick one up for as little as $230, but if you want more features like the gimbal or the FPV glasses, be prepared to spend up to $440.

The basic aircraft and transmitter costs $230, but for $310 you can get a version that comes with the FPV camera and a small monitor that attaches to the transmitter. The version with the HD camera gimbal is going to run you $400, and if you want the FPV racing version with glasses it’ll be $440.

This is an aircraft that is designed to make everyone happy. If you’re a brand new pilot you’ll love the auto hover feature. And the modular design means you can turn it into a racer or a camera platform in just a few seconds. Every aspect is beautifully designed and very luxurious.

The FPV version comes with a 700 TVL 5.8 GHz camera that quickly attaches to the front of the aircraft. Unfortunately the aircraft is still in development so I haven’t had the opportunity to test the gimbal, the FPV glasses, or the follow me feature. Those options should all be available in June of 2016, along with a smart watch and an app to be used for the follow me feature and waypoint navigation.

The video signal from the FPV system had a lot of static and it cut out from time to time, but I was testing a demo version so the final version should be better. It worked fine in open areas – it just didn’t work as well when I tried to fly around large metal structures. There is unfortunately no external antenna so I don’t know if it can be upgraded.

At first glance the Hornet-S doesn’t look very flashy, but on closer inspection you’ll see that it’s a high quality machine. It’s sort of like a luxury car, very polished with a lot of features. The smart battery has a built-in voltage meter and a nice quick-release system. The FPV camera and gimbal are also high quality quick-release components and the transmitter is very impressive with a built-in accessible battery. Everything about this aircraft is designed to be user friendly, luxurious and easy to understand.

It’s also very durable, made from high impact plastics. I managed to crash it once or twice when the compass was out of alignment, but it didn’t leave a scratch.

This aircraft is beautifully packaged in a very plush felt-lined box. It comes completely ready to fly; all you need to do is install the rotors and charge the batteries, and you’re ready to go. JYU has also developed a piece of software for you to reprogram the aircraft if you so desire.

I was testing a sample version so my manual was in Chinese; they have since released an English version. They have not released an English manual for the transmitter or FPV system yet, but between the information on JYU’s website and Banggood.com, I was able to find out everything I needed to know about the aircraft.

This aircraft felt great right out of the box. It has a push button launch that makes the aircraft fly up to about 15 feet and hover in place. Once it’s up there it will sit and wait for you to tell it what to do. In beginner mode the aircraft will only fly one or two miles per hour, in normal mode it’ll fly about 10 to 15 mph, and in advanced mode its top speed is 70 mph.

It’s a very good idea to calibrate the compass before the first flight. If it isn’t calibrated properly the aircraft will drift in large unstable circles instead of hovering in place. It’s easy to calibrate and the process only takes about two minutes.

This aircraft can launch itself into the sky like a rocket or automatically fly up the beach and film the sunset. It can play the role of racer or camera platform and does both with style. It may not be able to beat the fastest racers on the market, but it can hold its own, and while it doesn’t have a 4K camera, the 1080P dual axis gimbal should get some beautiful stable video. Overall, for the price it’s pretty impressive.

It has a return home feature that flies the aircraft back above the location it launched from, but it doesn’t land the aircraft, although it could probably be programmed to do so. Waypoint navigation and follow me features should be available in June of 2016.

This machine is great for racers who want to do more with a $300 aircraft than just race. It’s also great for filmmakers who want a camera platform that can be fun and fast when they aren’t filming.

The provided transmitter has two USB ports – one for recharging the internal battery and one for reprogramming the transmitter. It also has an A/V jack for a small video monitor. The basic FPV version comes with a 4.3 inch monitor that attaches to the top of the transmitter. A very cleverly designed holder for the monitor folds up into the transmitter, but the monitor is powered by the transmitter so you can only use it with this aircraft. There are two trigger switches for changing the video frequency and two spin wheels for changing the gimbal’s angle. There is also a button for the return home feature, a take-off and landing button, a button to change the light colors, a camera start/stop button and a mode switch with three modes.

I hope to test the waypoint navigation and follow me features next month when they become available. I’m also looking forward to testing the android powered advanced transmitter with an imbedded monitor.

I found it all to be very easy to use and I think JYU did an amazing job putting together a high quality, user friendly system.

The FPV camera quality was fine, but the signal was not as strong as I would like so FPV flight was tough in some locations.

Check back next month to find out about the gimbal and the 1080p HD camera system. 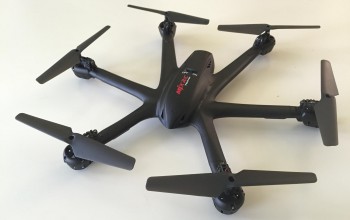 Introduction I have flown countless inexpensive quadcopters from a variety of manufacturers who are usually based in China. While each one has some unique featu...

I totally enjoyed this aircraft and highly recommend it to anyone looking for a good all-around aircraft for long-term use. Whether you want to race, film, or just fly, the Hornet-S from JYU is a good choice. It’s designed to be very user friendly and very capable, and it’s the least expensive aircraft with an auto hover and return home feature that I know of. Stay tuned to find out about the other more advanced features when they become available.
7