If you’re looking for a nice racer and you like flying through trees at a high rate of speed, then you’ll definitely enjoy the Eachine Blade 185. Racers have become increasingly smaller over the last year, and Eachine has definitely kept up with that trend.

In the past few months they’ve released three racers in the “200 millimeter or less” category, and each one is unique. The Assassin 180 was the first, and it also came with Eachine’s first set of VR glasses. It is a great obstacle course flyer, but the smart battery and GPS module are a bit of a letdown. Eachine, undeterred by the Assassin’s lukewarm reception, quickly came out with two additional new racers: the Falcon 180 and the Blade 185. Both of these racers are improvements on the Assassin. The Falcon 180 is a stripped-down, high-speed, mean machine, and the Blade 185 is a maneuverable, high-tech forest flyer.

The Blade 185 uses smaller B1806 2300kv motors and a slightly smaller 520 TVL FPV camera, but it has more flight data available, such as speed, direction, and altitude; it’s also better in tight quarters and is a much better looking aircraft.

Eachine put a lot of love into the look of this aircraft; it’s very polished and nicely built for such a small racer. The main body is a sandwich of two carbon fiber plates with a really nice red plastic reinforcement separator that goes all the way around. It also has a red cockpit on the front that surrounds the camera and serves as the camera mount. This gives it a nice aerodynamic look, and the headlights that are mounted underneath the cockpit are amazingly bright, making it possible to see the aircraft at great distances. I personally love the headlights because it makes it easier for you and your spotter to tell which way the aircraft is facing even when it’s a few hundred yards away. The GPS module and a spare camera mount sit on the top of the aircraft with the battery underneath to keep the profile low. Eachine has even provided a branded antenna for the back of the aircraft. It’s the first mushroom antenna I’ve seen from Eachine, and it works great.

It’s also a very durable aircraft; I flew it into a tree on my first flight, and it fell about 50 feet to the ground without a scratch. The propellers stop themselves when they detect an impact; this feature works great and helps protect the motors and rotors. The body of the aircraft is very solid and forgiving, which is a good feature for a racer.

The ready-to-fly version comes packed with a transmitter, a battery, a slow charger, a set of rotors, and the antenna. It also comes with a removable USB port that you can plug into the bottom of the aircraft if you want to reprogram or access the OSD flight system. It also has a permanent USB port on the side of the aircraft for reprogramming the Naze 32 flight controller. You can put everything together in just a few minutes and get flying as soon as you charge your battery.

You will need to provide your own video monitor to view the 5.8 GHz video signal; I used a $60 set of Eachine 007 VR glasses and had no trouble flying FPV with them. Your fatshark glasses should work just fine with it.

The rotors are a little tight on the shaft, but they still work great and seem to be very durable. It uses a fully reprogrammable Naze 32 flight controller and a reprogrammable OSD system. It also has a built-in CleanFlight blackbox system for recording flight data. An invaluable feature for people that like to tweak their aircraft, it’s also great if you want to know what your top speed was or how high or how far you flew.

The manual was put together well with all the information I needed to get started. There is also a large amount of online data from Eachine and Banggood about the aircraft if you have technical questions.

Smaller racers are quicker and nimbler than larger racers, and they do take more skill to fly. On my first flight, I was treated to a fully exponential flight experience. That means that the further you push the stick, the further the aircraft leans. It also means that when you let off the stick, the aircraft doesn’t auto-stabilize. It’s the proper way to fly a racer, and it gives you more speed and control, but it does take more skill.

I didn’t need to tune any of the flight controls out of the box; it’s all very nicely set up and ready to fly.

As soon as I put on a pair of VR glasses and started flying, it was obvious what this aircraft was built for: It was built to fly through obstacles at high speeds. I call it a “Forest Flyer” because it’s great for flying through something like a forest at high speeds and avoiding obstacles as opposed to straight shot drag racing “Dragon Flights.”

It’s got enough speed and power to handle hard core flight while still being very nimble and maneuverable. I was flying through trees at 30 miles per hour without any trouble. I haven’t pushed it to its top speed yet, but I’ve pushed it up to at least 40 or 50 mph.

It has two flight modes, but it isn’t programmed for 3D. It also doesn’t have any form of altitude hold or return home mode.

The GPS module and the altimeter are only able to provide you with real-time data about your speed, altitude, heading, etc.

The provided transmitter is the standard Eachine FS i6. It’s become the standard transmitter that Eachine uses on all of their aircraft and is a very nice TX. It can display data from the aircraft, and it’s also programmable and versatile. It only uses four AA batteries, but it still gets great range and has a good run time.

There is no flight planning or waypoint navigation system available on the stock aircraft.

The OSD telemetry includes battery voltage, speed, height, latitude, longitude, compass direction, pitch and roll angle, artificial horizon, flight mode, and GPS satellite status. I really like the OSD data; it’s very smooth and clean, and it transmits in real time better than any other system I have tested before. It’s almost possible to fly with the instrument data alone. It’s a very user friendly system with all the data laid out in such a way that you can check your voltage, altitude, direction, or speed at a glance without distracting yourself from the flight.

The Blade 185 uses a smaller camera than the Falcon 180, but honestly, I liked the video stream from the Blade better; it seemed cleaner and better able to handle multiple lighting conditions. It also seemed to have less static around power lines and other obstacles. Also, when you land, it gives you a quick readout of what your top speed was, along with other stats.

Another thing about the camera is that if you position it correctly, you can see the cockpit in the bottom of the screen. It only shows up a tiny bit and doesn’t block anything, but it helps give you a sense of how close the aircraft is to obstacles.

It’s a very easy-to-use system, but the GPS module is a bit slow when it comes to getting satellite signals; it can take anywhere from two to five minutes for it to pick up enough satellites to lock in its position. 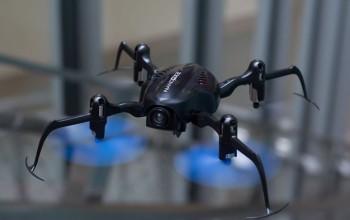 Introduction FPV drone racing is a sport that is catching on quickly around the world. Teams are forming. Networks like ESPN are carrying live races. People are...

If you want to race through the trees in your back yard at 30 mph or go to the park and race other pilots, then the Eachine Blade 185 is the aircraft for you. It takes a little skill to fly and costs a little over 200 bucks for the RTF version, but it’s worth the price. It’s not the fastest racer in the world, but it has speed and maneuverability to spare, and the OSD data is amazing.
7