The Phantom 3 Professional is the latest and most sophisticated in the the Phantom series from the current leader in ready-to-fly camera drones, DJI. Building on the the success of the previous Phantom models with integrated cameras, the Phantom 3 Professional takes you to the cutting edge with a fully stabilised 4K video/still camera with a Sony sensor, rectilinear lens, built-in Lightbridge technology, glonass-enabled GPS, a full-featured control app for tablet and smartphone including HD video downlink and the pedigree behind one of the original consumer drone lines. Although aimed squarely at the consumer market, it’s also being used by aerial video and photography professionals due to it’s excellent stability and impressive camera.

The basic look of the DJI Phantom has changed very little since its launch in January 2013, and the all white, slightly pot-bellied shape has made it perhaps the most recognisable of the consumer ready-to-fly drones. The build quality is good and the plastics well finished with no joint gaps or rough edges. Some users reported small hairline cracks around the rear motor mounts after a few hours of use, and there has been no confirmation as to what might cause this – there has been speculation that over-tightening of screws in production, or a problem with a batch of injection mouldings may be the culprit. DJI has not officially commented, although they are replacing any cracked shells under warranty. Not all aircraft suffer this problem and those that do don’t exhibit any other issues. It seems to be limited in scope, but worth looking out for. The rest of the aircraft is well assembled and has a “quality” feel. The transmitter (“remote controller”) is chunky and solid and the control inputs are reassuringly weighted, with quality switches and buttons.

The Phantom body has a reputation for being tougher than it looks and it will take a reasonable amount of damage before actually breaking. Spares are available allowing you to replace landing legs or even complete body shells if you need to. The Phantom 3 series is trickier to get inside than its predecessors, however, as DJI now use torx head screws to secure the shells together, as well as 12 clips around the shell which make opening it a trickier task than before.

The Phantom 3 Professional is a ready-to-fly aircraft, and it really is a case of “charge and fly”. The only setup required is to attach the self-tightening propellers and charge the flight battery and the transmitter. However you should thoroughly read the comprehensive online user manual as the Phantom 3, whilst easy to fly, has a lot of features it is definitely worth taking the time to familiarise yourself with, particularly with regard to advanced camera controls and the various flight modes. DJI also has a wiki on it’s web pages and a customer forum, so searching for answers to common questions is usually quick.

There have been very few reports of Phantoms not flying well straight out of the box, and almost all of these have been fixed by running through calibration routines that the app walks you through. The Phantom 3 was conceived and marketed as a “flying camera” and is factory set to give absolute beginners a good flying experience from day 1. Everything you need is included: remote controller, one battery, 2 sets of props, battery charger (for flight battery and remote controller), some spare dampers for the camera gimbal. You will need a compatible android or iOS device to use the companion app and have live preview and in-flight camera controls, etc.

The Phantom is aimed primarily at the amateur user who wants to experience aerial videography and aerial photography, so don’t expect this to a be a rocket ship! Having said that, the Phantom is surprisingly sprightly at full throttle, and the active braking on the motors means it’s very responsive to control changes. You can change the expo and degree of braking as well as other parameters from the companion app on the fly, and in standard GPS mode the aircraft can be made to very aggressively come to a sudden halt and hover when the controls are released if you wish. As a camera platform I found the default active braking level to be a bit too aggressive, but it’s easy to dial it down to suit your flying/filming style.

A welcome addition to the Phantom 3 Professional is the ability to dial in expo values to the control inputs via the companion app. Missing from the previous versions, this means that at long last you can make a slow, smooth pan using the rudder/yaw control, the sensitivity of which was annoyingly fixed in older Phantoms. If you choose to allow the option, you can switch the aircraft out of GPS mode into “atti” mode where it will drift with the wind whilst holding height. Indoors or in areas without GPS coverage the Visual Positioning System will work at heights up to about 10ft above ground level. It uses a mix of ultrasound and cameras, the latter meaning that unless there is some contrast to the surface the aircraft can’t tell if it’s drifting easily enough to give rock-solid stability.

In GPS mode the hover accuracy and stability is extremely good, and perfect for achieving those “400ft tall tripod” video shots. The addition of a glonass receiver to the GPS system means in northern Europe I have yet to see fewer than 14 satellites locked at any time, and usually it’s more than 16. Height-holding is also accurate, and the aircraft performs its camera duties extremely well in all but the gustiest of conditions.

Climbs are punchy and quick, but descents are rather sluggish. Previous Phantoms could suffer problem when descending too fast into their own prop wash, potentially leading to aircraft dropping rapidly to the ground. DJI tweaked their propeller design to minimise the risk of these stalls, but they also limited the descent speed across the Phantoms to a fairly pedestrian 3m/s to make sure no one got themselves in trouble. If you need a rapidly descending camera shot you’ll either have to film a climb and reverse the video in post, or choose a different camera aircraft!

You won’t win any FPV races with a Phantom 3, but performance is more than adequate to get you to the next shot quickly and accurately in most circumstances, which is the most important consideration for a camera platform.

The controller is well designed and ergonomic, the controls all falling easily to hand. It’s heavy, though, especially if you add the additional weight of a tablet in the included mount, so you’ll need a neck strap (or consider a third-party harness from the likes of http://bit.ly/bestem to take the weight off your neck). Wheel controls on the transmitter shoulders allow for camera tilt and for adjusting settings on the app, whilst buttons inboard of those give access to shutter controls for the camera. A nice addition is two buttons on the back of the transmitter that fall nicely under your fingers and can be allocated a function of your choice from a list of several options in the app. For example you can allocate one button to flip straight to map mode and the other to pop up detailed battery information.

There is a nicely-designed integral holder for a smartphone or tablet which folds away neatly for storage. The smart device you use links to the controller via USB (one cable (in DJI white) is supplied to add to your collection) which simultaneously charges your phone or tablet and provides video and data communications between aircraft and app. It all feels solid and very well put together.

The 4K camera and gimbal unit is the heart of this “flying camera” setup. The rectilinear lens used means no “fisheye” effect that you get using GoPro or similar action cameras, so your still and video footage won’t need any lens correction in post-production. Having a Sony Exmor branded 1/2.3” 12.4MP sensor will please many, and shows how far DJI cameras have come since the original Phantom 2 Vision, which used an unbranded sensor often found in webcams.

The camera can shoot stills in jpeg format, or in dng raw format for maximizing flexibility when processing photos, with a max size of 4000×3000. It can also be set to shoot in burst and timelapse modes and has an auto exposure bracketing feature to maximise the chances of getting the right exposure. It can be set with ISO from 100-1600.

For video it can shoot in up to 30fps at 4K resolution, and up to 60fps in 1080p full HD which is very useful for slowing footage down in post-production. Video ISO is from 100-3200. For both stills and video the companion app gives you a lot of camera control in the air – not just shutter, but also full control over the exposure controls and white balance as well as being able to choose your preferred colour profile. Of course leaving everything in fully auto will mean the camera will constantly adjust its settings to try and keep an optimum exposure for you.

The image quality is good. For the vast majority of amateur users, the video and still picture quality will be fantastic. Only the keenest eyed amateur (or professionals) will find criticisms. Stability is excellent. There are very few reports of people encountering any “jello” in their videos with the Phantom 3 Professional. Smooth motors and good quality control on the props, as well as effective vibration damping, means the camera is well isolated. The integrated 3-axis gimbal is very accurate and effective, although some users report that the gimbal loses its level occasionally and needs recalibrating. Early units seemed to suffer from this a lot (many videos from early-adopters showed a sloping horizon), but recent hardware and firmware changes seem to have reduced these instances. When it is straight and level this is an excellent aerial camera unit. 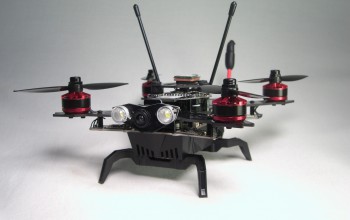 The Phantom 3 Professional from DJI is a full-featured aerial filming platform that enables anyone to capture very high quality aerial images out of the box. Advanced features like glonass compatibility, HD downlink and control over Lightbridge, a Visual Positioning System, and flight modes like Point of Interest, Follow Me and programmed waypoint flying coupled with a good quality 4K-capable camera means that for serious amateurs (and even some professionals) this is very strong package out of the box. If 4K isn’t important to you, then you might well consider the sister Phantom 3 Standard, which offers an almost identical package but with a 2.7K max resolution camera and slower battery charger, but with a price saving of about 20%. DJI seem to be encouraging customers to buy from them direct, and they offer free shipping from China via their http://bit.ly/djistore and a “no customs charges” pricing policy that means they are often cheaper to buy from than local dealers. However there are consistent complaints from customers who buy direct and then need support about issues with contacting DJI customer service, and the long wait times if you need to send the unit to one of their repair centres for warranty repair (about 6-8 weeks at time of writing). If that could be an issue for you then you might like to look at local dealer as an alternative purchase point. However if you want the highest possible quality visuals available in a well-built and sturdy ready to fly package from a company with a track record in aerial imaging and then the Phantom 3 Professional is DJI’s most advanced mid-sized quadcopter
8