Who are the target users of the Hubsan X4 FPV Quadcopter?

The Hubsan X4 H107D FPV Quadcopter is a Micro-Sized Quadcopter that can be safely used by beginners to learn drone-flying skills before advancing to flying First Person View (FPV). It is also a great tool for experienced Drone Flyers who want to develop their FPV skills before moving on to larger and more powerful FPV Racers or FPV Aerial Photography Quadcopters. It is small enough to be flown indoors and performs extremely well outside in calm conditions. The H107D is a RTF (ready to fly out of the box) Micro-Sized Quadcopter.

How the X4 FPV evolved

A few years ago, the outstanding success of the Micro-Sized drone, the Hubsan X4 H107 Quadcopter led to Hubsan Technology quickly releasing a number of X4 variants. First, they added LED lights to the original model for the Hubsan X4 H107L, and then two camera versions were produced, the X4 H107C with a 0.3 MP Camera and X4 H107HD with 2MP Camera, followed by the groundbreaking Hubsan X4 H107D FPV Quadcopter.

All the Hubsan X4 variants have been widely copied and a number of RC companies have released similar models to the Hubsan X4 H107D FPV Quadcopter.

FPV Drone flying is gaining considerable traction as more and more drone flyers begin to experiment with this style of flying. The drone is flown by viewing a screen that is on or attached to the transmitter; advanced racing drone flyers use special FPV goggles to fly their drones. The Hubsan X4 FPV Quadcopter is still the very best introductory model for those wishing to develop their FPV flying skills. Although it is considerably smaller and lighter than the traditional 250 size FPV Racers or the larger FPV toy models, such as the JJRC H8D, the very fact that it can be flown safely in small spaces puts the H107D in a class of its own.

The Hubsan X4 FPV Quadcopter comes with a dedicated Remote Control Transmitter that controls the Quadcopter on a 2.4 GHz frequency and receives a real-time video feed on a 5.8 GHz frequency. The live video stream can be transmitted up to a distance of 100 meters. Unlike many of the available alternatives, the Hubsan FPV video stream from the 0.3-pixel camera is in real time with no noticeable latency.

The Hubsan X4 FPV Quadcopter is powered by four (4) 820 size coreless motors that are driven by a 3.7-volt 380 mAh Lipo battery, which will provide approximately 5 to 7 minutes of flying time on a full charge. The battery takes about 30 minutes to recharge using the supplied USB cable.

The advanced 6-axis gyroscopic flight control system ensures stable flight, which is another big plus if you’re just starting out.

You will also receive a propeller guard, a set of spare propeller blades, and a propeller removal tool. A USB battery charger and the well written Hubsan X4 FPV manual are also included.

You will need to buy four (4) AA batteries to power the transmitter and a Micro SD card to record the FPV video feed from your transmitter.

When you take the Hubsan out of the box, you can’t help but admire the design. I’ve handled loads of these Micro-Sized Quadcopter Drones over the last two years or so, and this Hubsan is obviously top quality. Strong rigid plastic, rubber shock absorbers on the motor housings that act as landing feet, and unique open-on-impact arms acting as an insurance against breakage, not to mention tight camera housing to the front with a well-angled camera and tightly mounted FPV antenna. There is really nothing to dislike about this Micro FPV Quadcopter. I give it a ten out of ten for design and build, you’ll love it as soon as you open it up. Speaking of loving it, there is a great active community of avid X4 fans out there on social media, as well as great X4 FPV video footage on YouTube. There is also plenty of advice that is readily available for this model, as it has been extremely well documented and followed with great interest.

Unlike the vast majority of Toy/Hobby Grade Drones, this manual is in well-written English and is easy to comprehend. It introduces the X4 as an easy-to-use full-featured Remote Control Model that is capable of stable hovering, fast flying, and acrobatic maneuvers. That may seem like a generic description for all X4’s, but as you will learn, the Hubsan X4 FPV offers all this and much more. There are plenty of safety checks, tips, and information on how to charge the battery in the manual. In Section 5, there is a detailed description of the remote control that shows the on-screen display, as well as button and stick functionality for different modes of flying. I can’t emphasize enough the importance of having a well-written, well-illustrated manual. There is nothing left to chance, because it’s all in there, from removing the propellers and installing the guards to recording video footage and how to set it to expert mode… the Hubsan manual has everything covered.

Any Drone Flyer who has flown similarly priced FPV drone models would tell you that this Hubsan Transmitter is far superior in terms of design and performance to any of the competitors. Many use the WLtoys type Transmitter with a detachable FPV screen, which I personally find cumbersome and I think that the FPV video stream is difficult to view. I find that the Hubsan X4 FPV transmitter sits well in the hands, has an easy-to-adjust viewing angle and, whether indoors in artificial light or outdoors in sunlight, it is a far better example of user-friendly FPV transmitter technology.

All details of how to set up your Hubsan X4 FPV are clearly outlined in the manual. Charge your Lipo up, insert four (4) AA batteries in the transmitter and, especially if flying indoors, attach the propeller guards. Follow the binding process and you’re ready to go. If you are new to drone flying, just fly low and slow until you get used to the functionality and sensitivity of the sticks. If you have had experience with other Quadcopter models, then you will be ready to go. Try simple flight tasks at first, like flying in and out of rooms just by looking at the screen. You will probably crash a few times, as it takes some time to get used to this flying style, but be patient! The Hubsan X4 FPV is simply the best FPV learning tool available and is fantastically fun to fly.

The beauty of this little flyer is that it’s not all about FPV Flying. You can also have some serious flying fun, especially outdoors on a calm day. Take off the propeller guards to lessen the weight, set it up in expert mode, forget flying it by looking at the FPV screen and have some fun! In expert mode, the Hubsan H107D is far more responsive to stick input. The Yaw rate is faster, as is the pitch and speed. You can also alter the sensitivity rates in expert mode to increase the maneuverability of the X4.

For me, there’s nothing better when you just can’t be bothered with all the intricacies of calibration, GPS and the inherent stress of flying more expensive models. You can get this Micro Drone up in the air in minutes and have a highly enjoyable flying experience.

Once you’re confident in your control, try flipping the X4, which is achievable by stick movement (detailed instructions are in the X4 manual). Most similar models of this size use automatic flip buttons, which are impressive to onlookers, but don’t improve your flying skills. You will get immense pleasure mastering manual 360-degree flipping with the X4; it’s far more rewarding than just pressing a button. However, you will need to be in expert mode to enable that flip function.

You can also use the X4 to practice funnels, pirouettes and reverse flying. All these techniques will help mind muscle development and properly prepare you for flying more advanced Drones and FPV Quadcopters.

Get some rechargeable AA batteries for your remote control, because the FPV screen really sucks the juice from batteries. Buy some extra batteries for your X4 FPV Drone and a multiple-battery charger so you can prolong your flying time. One thing’s for sure, flying these Micro FPV Drones is extremely addictive, but that isn’t surprising to me… it feels just like Stars Wars! I’ve seen a 16-year-old FPV Drone Flyer sit in the back of my car looking at a 3-inch FPV screen and fast fly a FPV Racing Drone around a field, navigate trees and perform outstanding stunts. He and his cousin build fast FPV Drones, so they often borrow my Hubsan X4 FPV Drone to practice their FPV flying skills. For me, that seems like a great endorsement!

I’m in the process of organizing a drone exhibition at a local Tech Fair. The guy who is organizing the event told me that he would like to display a drone he had bought. He told me that he had bought the Quadcopter to learn drone flying with his 8-year-old son, and you can probably guess what he bought… I asked him why he had chosen the Hubsan X4 FPV Drone for his first purchase and this was his reply; “I did my research and had a budget. The Hubsan X4 FPV Quadcopter came out on top. Wherever I looked, it was highly recommended.”

The Hubsan X4 FPV RC Quadcopter has become a worldwide bestseller. There is no finer Micro or FPV Drone on the market, and while that may be a bold claim, there are not many drone flyers that would dispute this.

If you’re looking to get into Drone and FPV Drone flying, get yourself the Hubsan X4 H107D FPV Quadcopter. It will not disappoint! It is so much fun to fly and the X4 FPV offers a great entry-level introduction to Quadcopter, Drone and FPV flying. 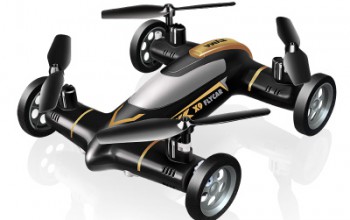 Introduction I’m a big fan of Syma quadcopters.  The Syma X5C and X8C are two of my favorite low cost beginner copters.  So when I saw the Syma X9 Flying Car on...

The Hubsan H107D FPV Quadcopter is one of, if not the, finest Micro Quadcopter ever produced. It is most suitable for beginners and experienced drone flyers that want to develop their FPV flying skills. It is recommended for ages 14 and above, but under the right adult guidance, it can be flown by those of a far younger age. I have witnessed a 10-year-old boy use an X4 to film his school from above and have also seen experienced FPV flyers get a lot of pleasure from this micro-sized model.
9