The Phantom 2 Vision+ was the first ready-to-fly drone sporting a built-in, 3 axis stabilised HD camera with wifi video downlink. Based on the Phantom 2 hardware that was first released in October 2013 as the Phantom 2 Vision, the Vision+ saw the introduction by DJI of the integrated camera/gimbal concept that has continued into the Phantom 3 line.

Using a rechargeable range extender to make a wifi network between your phone/tablet and the aircraft mean that video and telemetry are sent over a 2.4GHz signal, with control of the aircraft unusually using 5.8GHz to avoid interference. Marketed as “your flying camera” by DJI, the Vision+ boasted features designed to allow even flight novices to get airborne and start shooting completely stable aerial video and photos.

The basic look of the DJI Phantom has changed very little since its launch in January 2013, and the all white, slightly pot-bellied shape has made it perhaps the most recognisable of the consumer ready-to-fly drones. The build quality is good and the plastics well finished with no joint gaps or rough edges. The aircraft is well assembled and has a “quality” feel, and the integrated gimbal and camera is a design highlight. The transmitter (“remote controller”) is solid with rounded edges and the control inputs are reassuringly weighted, with quality switchgear. There is a somewhat cumbersome looking clamp for a smartphone that operates like a giant spring clip attached to the bar on the transmitter that holds phones securely in place.

The Phantom body has a reputation for being tougher than it looks and it will take a reasonable amount of damage before actually breaking. The gimbal, however, is necessarily made to be light and so will bare the brunt of any crash damage. Spares are readily available allowing you to replace landing legs or even complete body shells if you need to, and the Phantom 2 Vision+ is easy to get inside simply by removing the 12 hex head screws and the 4 cross head screws that hold things together.

The Phantom 2 Vision+ is a true ready-to-fly aircraft, and it takes very few steps before you’re out of the box and ready to take-off. The only setup required is to attach the self-tightening propellers and charge the flight battery, transmitter and wifi range extender. You’ll also need to download the Vision app to your smartphone to take advantage of full camera controls, ground station and first person view. There’s no full user manual supplied in the box, just a basic “quick start” card, so it’s strongly recommended you read the comprehensive online manual. DJI also has a wiki on it’s web pages and a customer forum, so searching for answers to common questions is usually quick.

There have been a few teething problems since launch with unwanted issues introduced with buggy firmware releases, but the platform has now matured into a stable one with no major bugs remaining. The Vision+ was conceived and marketed as a “flying camera” and is factory set to give absolute beginners a good flying experience from day 1. Everything you need is included: remote controller, one battery, 2 sets of props, battery charger (for flight battery and remote controller), wifi range extender, some spare dampers for the camera gimbal, even a DJI screwdriver should you need it.

You will need a compatible android or iOS device to use the companion app and have live preview and in-flight camera controls, etc. Those with older or less powerful devices might find that their phone struggles to keep a smooth image at the highest preview resolution and so may need to drop to a lower resolution and/or frame rate to keep things from stuttering – as the app has to decode the transmission to show the video feed it’s pretty processor intensive.

The Phantom is aimed primarily at the amateur user who wants to experience aerial videography and aerial photography, so don’t expect this to a be a rocket ship! Having said that, the Phantom is surprisingly sprightly at full throttle, and there’s plenty of lifting power for those who want to mod their aircraft or add tracking devices or other extras. The Vision+ lacks any expo tuning, so achieving slow smooth pans using the yaw control requires a lot of practice and a delicate thumb. Third party mods are available to electronically slow the yaw response, but it’s a shame there isn’t a simple way to adjust this in the app or on the controller.

In the default “Phantom” mode all flying is in GPS mode, with no access to any Intelligent Orientation Control (IOC) modes. Changing the mode to “Naza” using the companion software hooked up to the aircraft allows access to Home Lock & Course Lock modes via switches on the transmitter. Although potentially useful as “get out of jail free” options for the beginner, it’s probably a good idea to learn to fly without relying on these “get you home” modes so that you’re prepared if you ever lose GPS signal. This is probably why DJI chose not to activate them by default.

In GPS mode the hover accuracy and stability is fine, although with no glonass receiver on board it’s not as nailed as the newest generation of Phantom 3 but it’s perfectly adequate for most shots. Height-holding is accurate, and the aircraft performs well until winds get gusty or near 20mph.

Climbs are punchy and quick, but descents are rather sluggish. The Phantom 2 could previously suffer the problem of losing lift when descending too fast into its own prop wash, potentially leading to aircraft dropping rapidly to the ground (“vortex ring state”). DJI tweaked their propeller design to minimise the risk of these stalls, but they also limited the descent speed of the Phantom 2 to a sluggish 2m/s to make sure no one got themselves in trouble. If you need a rapidly descending camera shot you’ll either have to film a climb and reverse the video in post, or choose a different camera aircraft!

You won’t set any speed records with a Phantom 2 Vision+, but performance is more than adequate to get you to the next shot fairly quickly and accurately in most circumstances, which is the most important consideration for a camera platform.

The controller is reasonably ergonomic, the controls all falling fairly easily to hand. It’s not particularly heavy unless you attach a tablet to it (which will involve using a third party adapter or other trick to fit it into the phone-size holder provided). A centre-sprung wheel control on the transmitter shoulder allows for camera gimbal tilt, and there are a couple of switches for use with IOC functions and setting flight modes. There are no other camera or adjustment controls on the transmitter, everything else needing to be controlled with the companion app. The built in rechargeable battery has 4 led indicators on the front to show charge level, and the transmitter will usefully beep at you if you leave it switched on but not linked to your aircraft so you don’t run down the battery unnecessarily.

The companion app is fine, and allows you to control camera settings on the fly, operate the shutter, see a live view and a mop view and program waypoints for autonomous flight missions. You can also use it as a photo gallery and sync photos from the aircraft to your phone without connecting the aircraft to a computer if you wish.

The HD camera and gimbal unit is a reasonable quality HD camera. The lens is very wide angle, so some “fisheye” distortion is apparent. However there is an official Adobe lens profile for barrel distortion that means you can easily remove it from pictures and video using Adobe products like Lightroom, Camera Raw and Premiere. The unbranded sensor is fine, although videophiles will hanker for a 4K option. The still images it takes are very good, and the fact that it can shoot in raw means you can apply your own levels of sharpening and colour adjustment rather than relying on the camera jpeg defaults.

The camera can shoot stills in jpeg format, or in dng raw format for maximizing flexibility when processing photos, with a max size of 4384×3288 at 14.4MP. It can also be set to shoot in burst and timelapse modes, you can set the sharpness level and has exposure compensation from -2.0 to +2.0. It can be set with ISO from 100-400, and has auto and selectable white balance modes.

The image quality is good. For the vast majority of amateur users, the video and still picture quality will be great, and in my opinion the stills are very good. Stability is good. There have been some reports of people encountering “jello” in their videos with the Phantom 2 Vision+, but this is most often a result of damaged/imbalanced props or worn out vibration dampers. The integrated 3-axis gimbal is very accurate and effective and out of the box is level and true, and rarely needs recalibrating. 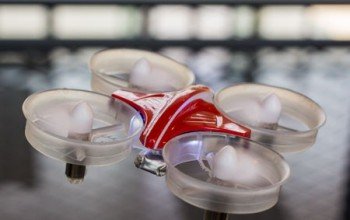 Introduction The Blade Inductrix came out this past summer and caught my attention because it is different looking than any of the other nano (small) sized quad...

The DJI Phantom 2 Vision+ is a mature aerial filming platform. Without some of the latest innovations like Lightbridge and 4K video it’s now very much an amateur’s product, although some argue the stills from the Vision+ are better than those from the newer Phantom 3. The wifi downlink and 5.8GHz control system limit the effective range of the unit, but there are now many third party antenna modifications and add-ons that can be purchased that can dramatically increase the range without boosting the power if that’s what you need. Using a smartphone as a display device means holding the controller isn’t too tiring and you don’t need to carry an extra smart device/tablet with you. If you have a smartphone from the last couple of years it should handle the app without an issue, but older or less powerful phones may struggle to process all the video data and display it without lag or breakup. DJI are certainly the market leaders in drone technology, however there are consistent complaints from customers who bought direct and then needed concerning issues with contacting DJI customer service, and the long wait times if you need to send the unit to one of their repair centres for warranty repair (about 6-8 weeks at time of writing). If that could be an issue for you then you might like to look at local dealer as an alternative purchase point. Although the latest generation of Phantoms have built-in Lightbridge technology, 4K cameras and 4S power, the sure and steady Vision+ has proved to be reliable with stable firmware and has matured into a solid entry-level video/photo drone with fully stabilised camera and has proved to be a great introduction to aerial video for many people.
6