Yuneec came out of the blue to a lot of people when they released their Q500 (or Typhoon) series in 2014. In fact the Yuneec Electric Aviation company has been around since 1999 and was responsible for some of the first all-electric full-scale light aircraft to enter into production. They are no stranger to drones and other remote control aircraft, either, as they also manufacture the Blade, Parkzone, E-Flight and Firebird brands.

The Q500 Typhoon series competed squarely with the DJI Phantom range, and in the latest 4K Professional model Yuneec are setting their sites on the Phantom 3 Professional. Sold through a network of dealers and direct via the web in certain territories, the Q500 4K Professional has several features to distinguish it in the market, and the package seems to represent good value as it comes with everything you need to fly plus a hard case, 2 flight batteries and a standalone device that turns the drone’s gimbal into your own 3-axis stabilised hand-held 4K camera.

The Q500 is well built, although the plastics used feel a lighter grade than those used on a DJI Phantom 3, for example. Part of this will be down to weight saving as the Q500 is big – it’s over 25% bigger on the motor-to-motor diagonal than a Phantom – but this does mean it doesn’t feel quite as polished in the hand as some of its competitors. The landing gear feel a little flimsy, but this is mainly down to the fact that they are designed to be easily removed for storage, hence why these parts don’t feel as robust as on aircraft where they are not removeable.

The camera gimbal is removeable, although when doing this you need to unplug and replug a data/power cable each time which could leave to damage longer term if you frequently remove the camera from the aircraft to use the handheld SteadiGrip (which in itself is a rather plasticky affair that requires 8 AA batteries – but then again it’s included for free). The hard case that comes with it is useful for storage, but not for travel – it’s too big and it doesn’t feel like it will take too many knocks. The insert is also just polystyrene, rather than high density foam or similar.

In summary, the build quality is fine, but if you have experience of a Phantom or 3DR Solo then you will notice that it’s not on a par with those.

The Q500 4K  is a ready-to-fly aircraft, and comes with everything you need to fly, film and see video downlink. Because the transmitter has a built in touch-screen android tablet handling everything there’s no need to have your own smart device or download any apps, etc. Charging flight batteries and attaching props is the only setup required, and there’s a short wait for the transmitter to boot up.

The transmitter will inform you if the aircraft feels it needs any calibrations or you can instigate them manually. Any firmware updates that are required are straightforward and involve plugging into a computer via USB.

The Q500 is a large aircraft, but when powered up it’s very quiet compared to other aircraft in this class. The larger props mean the motors can spin more slowly and the noise from this aircraft is a lot less intrusive than other ready-to-fly camera drones, which might be a distinct advantage to those looking to use it professionally.

Although not specifically targeted at beginners, the aircraft is very forgiving and straightforward to fly. There is no auto take-off or landing functions, but neither of these manoeuvres are difficult – the weight and size of the Q500 lends itself to stability. Intelligent orientation control is available in the Smart Mode, meaning the aircraft will move through the air in the direction the right stick is moved, irrespective of the aircraft’s actual orientation. You can also access a “Follow Me” function in this mode. Angle Mode is traditional control relative to the aircraft’s nose position, using GPS and other sensors to hold position and height if controls are released. Finally Home mode is the failsafe or return to home option.

The transmitter also has a variable speed rate dial (marked from tortoise to hare) so beginners or those after smoother, slower flight can adjust the speed on the fly. At the moment there is no waypoint flying or autonomous flying mode – if that’s something you would find useful then that could be a deal-breaker for you with this aircraft as Yuneec have apparently stated that they don’t intend to add this function at any point. Out of the box the aircraft is set up with a “geofence” which means you can’t fly it very far or very high – a good thing for beginners, but restrictive for seasoned flyers. Luckily you can adjust the limits from the app in the transmitter.

In flight the Q500 is noticeably slower than the DJI Phantom – it’s max speed is just over half that possible with the 4K equipped Phantom 3 Professional, for example. As a platform designed for aerial video that’s not necessarily an issue, but it does mean that penetration into a headwind is not going to be as great, nor is the time taken to move between shot locations. Having said that the Q500 handles windy conditions surprisingly well for a large quad. It’s not as pinpoint accurate in its GPS holds as the DJI Phantom 3 Pro or Advanced, but it’s good enough to let the gimbal do its job and provide stable footage. The aircraft flies very smoothly and it’s a pleasurable and relaxed experience, but if you want sharp, crisp responses to your control inputs with quick and tight direction changes then this is not the drone for you.

Climbs and descents are pedestrian, but the latter is now par for the course for most ready-to-fly camera quads to avoid any issues with vortex ring state. Landing was uneventful – again the larger frame size and weight means things don’t get too squirrely close to the ground.

The “ST10+ Personal Ground Station” is large, having a built-in 5.5” touch screen, but surprisingly light. Again slightly lower quality plastics are used, but in this case that’s a benefit. It comes supplied with a stand-off bracket for a neck strap so that your view of the touchscreen isn’t obstructed by your lanyard or harness, and it also comes with a glare shield which can be fixed over the screen using small suction cups. Not the most elegant solution, but it does stick. However like all screens you will have a constant fight with glare on bright days.

The touch screen is mounted below the control sticks, which allows you to move one hand off the sticks to access the functions on the screen, which is a nice touch compared to drones that use tablets or phones that are usually mounted on holders on the top of the transmitter unit, meaning you need to go fully hands off to use their touch screens. The GUI is fine, and all the information you need is presented in a border around the FPV downlink from the aircraft – with a quick double tap you can remove everything and just leave a full 5.5” of camera view, which is useful for lining up your shots.

The transmitter is fitted with haptic feedback and it vibrates as well as giving audible warnings to draw your attention to anything it needs you to think about, like low battery levels, and it works well. The built-in lipo battery has an impressive 5200mAh capacity and has good life, and is charged by a standard micro-USB port and can use any 5v USB power source. It has it’s own built-in GPS receiver which allows for features like “follow me”, “watch me” and “return to home”.

There is some lag in the transmission from the aircraft to the touch screen, but whilst it’s noticeable it doesn’t detract from the experience unless you are attempting to fly the aircraft solely by reference to the screen – which you shouldn’t be anyway as a safety principle!

The 4K camera and gimbal unit produces reasonable quality results. Despite its wide angle, the rectilinear lens has no distortion and gives good, clean horizon lines. However in common with a lot of cheaper very wide angle lenses there is a noticeable softening of the image around the edges – more evident in the Q500 than in the Phantom 3 Professional. The rest of the image is nice and sharp, however, and with all settings on default, images are pleasing to the eye. The ability to shoot full HD at 120fps means that you can capture some very nice slo mo footage at half speed. Unusually for a camera drone the Q500 camera has a microphone (which you can switch on and off as required) so if hearing the sounds of your propellers and motors and wind noise is your thing you can have it if you want.

For shooting stills you have the option to in dng raw format as well as jpeg for maximum tweakability of your photos in post-processing. You can let the camera automatically adjust everything or you can manually set white balance, ISO and shutter speed – the latter from 1/30 to 1/8000. With everything set to auto the camera tends to slightly underexpose stills. In video mode you can also choose the resolution and frame rate on the fly.

The gimbal performs well, and there’s no sign of jello or rolling shutter effect. The camera can be tilted from 0 degrees to -90 degrees using the slider on the ground station. There is a small lag before the gimbal starts to react when you begin a tilt, but once it’s going the tilt motion is smooth. 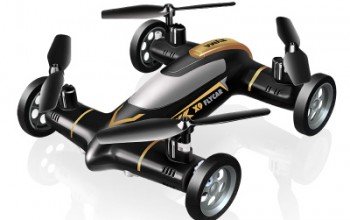 Introduction I’m a big fan of Syma quadcopters.  The Syma X5C and X8C are two of my favorite low cost beginner copters.  So when I saw the Syma X9 Flying Car on...

If you are looking to buy your first larger sized “proper” camera quadcopter then the Yuneec Q500 4K Professional has a lot going for it. It’s easy to fly even for absolute beginners, and the included extras make this a good value package. Beginners are going to appreciate the soft handling and the sedate pace of the aircraft, allowing them to build confidence and get impressive, smooth aerial video. More experienced pilots might find the sluggishness of the aircraft disappointing. The all-in-one transmitter/ground station is very good - the touchscreen makes changing settings easy, and you can do most things without having to move a hand far away from the sticks. Haptic feedback draws your attention to issues well, and the whole unit is a lot lighter than it looks with chunky buttons and switchgear that make it easy to find them without taking your eyes off your aircraft. The looks of the aircraft are rather more “boys toy” sci fi than cute and cuddly and won’t be to everyone’s taste, but the insect-like design does seem to help reduce the impact of the wind on what is a large aircraft. That size does give it impressive stability - perhaps the most important prerequisite for a camera platform - and a surprisingly long flight time given the weight. Given the price point and beginner-friendliness, the Yuneec Q500 4K Professional is a serious contender for your money if you are a first-time drone purchaser looking for a 4K video capable drone that’s not going to break the bank.
7