Are you ready to put down those toy helicopters and start racing with the big boys? If so, the Eachine Assassin 180 is definitely for you! This is a low-cost, ready-to-fly racing system that is great for new and advanced racers alike. It comes with a pair of VR glasses and everything you need to truly get into the sport of multi rotor racing.

Eachine is a relatively new player in the R/C world, but they’ve really made a name for themselves over the past year. Their first racer, the Eachine 250, was an amazing low cost racer with some nice features, including night vision. It introduced a large number of people to the world of multi rotor racing, but it lacked VR glasses and a GPS system.

The advancement of technology isn’t always driven by new inventions; it’s usually driven by last year’s technology becoming more affordable. The Assassin 180 is a great example of this. Some of the most unique features of this aircraft, including the GPS system, the barometer, and the FPV glasses, are nothing new, but the new low cost of these systems means that you can now put them on a racer at a reasonable price.

The camera broadcasts a real-time video stream, but it is a little lower resolution than most FPV systems. However, it is still a good FPV experience, and the camera works great under a multitude of lighting conditions. It even has night vision capabilities! It also has a set of extremely bright LED headlights that make a big difference when flying at night and helping you determine which way the aircraft is facing when it’s far away.

The signal from the FPV system is decent. I was able to get a few hundred meters away with very little static. However, when I flew the aircraft through an obstacle course of metal fences while standing in the fenced area, I did get a lot of static. However, I think that had more to do with the metal fences interfering with the signal than the quality of the system.

After 10 years of reviewing R/C aircrafts, it was my first true FPV flight, and I was admittedly a little nervous, but I caught on pretty quickly and was flying through tents and around obstacles in less than 10 minutes.

It was a very enjoyable experience and one that I strongly suggest everyone try at least once.

Let’s talk about the way this aircraft looks. In two words, it’s ugly. It’s a whole lot of technology in a tiny package, and it looks like a science experiment or a giant insect made of carbon fiber and electronics. But it’s about function over form with this aircraft, and it does have some good functionality. Otherwise, it’s just a sandwich of circuit boards and carbon fiber plates with a plastic base and a bunch of antennas.

Although it looks very fragile, I found it to be more durable than I expected. It fell out of the sky from about 20 feet on two separate occasions because of a bad battery and only broke a single landing gear.

The Assassin comes in a box that doubles as a carrying case, and it reminds me of the case that held Griff’s hover board in Back to the Future 2. It has a solid outer shell with a really nice set of foam compartments. It’s a well thought out compact design, and everything can be unboxed and assembled in about five minutes. Assembly consists of sliding the rotors onto the motors, screwing them in place with a set of nuts, screwing the FPV antenna onto the back of the aircraft, and placing a set of plastic covers over the two receiver wires.

The manual was very short, with less information then I expected. Hopefully they’ll add more information in the future. It didn’t answer questions about what modes are available and what the switches do. I just had to figure that stuff out on my own.

It is pre-programmed and ready to fly, and it has a built-in USB port that allows you to reprogram the NAZE 32 flight controller. It supports base flight and clean flight, so you have a lot of options when it comes to fine tuning the aircraft. I personally would love to increase the yaw rate; I find the yaw to be rather slow in all three flight modes. It’s a very fast, smooth flier, but it’s a slow spinner.

My first thought during my first flight was, “This is more stable than I expected.” It’s a very small, powerful brushless aircraft, and the gyro, compass, and accelerometer are all very well-tuned. I’m not sure what the top speed is, but I was going well over 20 MPH in beginner mode without even pushing it.

The only modification I made was to move the GPS module to the top of the aircraft. It was originally positioned below the carbon fiber camera plate, and carbon fiber is known to block signals, so I decided to place it on top of the camera platform.

I wasn’t super impressed with the GPS system. It would take anywhere from five to ten minutes to lock in enough GPS satellites to work, and it didn’t provide much information beyond how fast the aircraft was flying. I’m sure it can be programmed to do more, but the stock system is a little limited.

My first FPV flight was in the back yard at night, and I was impressed. The night vision system made it possible to see everything without a problem. When I took it flying at sunset, the image looked great, and I had no trouble seeing anything. It handles low light conditions very well.

There don’t appear to be any pre-programmed stunts, and, although it has a GPS system, it doesn’t seem to have a return home feature or auto hover feature.

This aircraft is designed for someone who wants to race. It’s a straight-up racer, not a cinematography platform. It doesn’t even record the video stream.

The included Eachine i6 transmitter gets great range, and it can store settings for up to 20 aircrafts. It’s a 6-channel transmitter with four switches, two knobs, and a nice backlit display.

The telemetry displayed in the glasses is very impressive. It shows heading, voltage, temperature, speed, frequency, run time, and altitude. It will also flash a low voltage alarm in the middle of the screen when the battery gets low.

Everything was very easy to use except for the aircraft smart battery. I had a lot of trouble getting it to recharge, and I am not a fan of the battery or the connector. I’ll take a good old deans connector any day. At least with a standard battery and connector I can use a faster charger.

I do love the batteries that power the glasses. They look like 9-volt batteries and fit in a 9-volt slot, but they are actually rechargeable 7.4 batteries with built-in voltage meters. It comes with two of them, and you can even recharge them with a standard USB cable.

The camera isn’t the highest resolution camera in the world, but it gets the job done, and the night vision system and bright headlights are a really big plus.

The video quality is pretty nice when viewed through the glasses, and the glasses themselves are actually comfortable and capable. It’s just a single screen display, but there is only one camera on the aircraft, so there is no need for a 3D stereoscopic display. 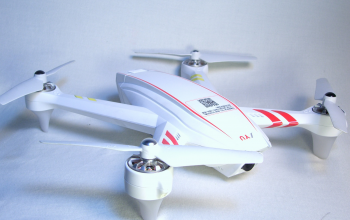 You can buy all sorts of drones these days, from racers to machines capable of producing professional video. But if you need an aircraft that can film high qual...

In conclusion, Eachine put together a nice system. It is a good way to finally strap on a pair of VR-glasses and start racing without breaking the bank. It has enough features to get you started and the ability to be modified into a personalized hardcore racer. If the smart battery functioned a little better it would be an amazing system, but with the short flight times and long charge times, you’re definitely going to want a few extra batteries before going to the track.
8