The Cheerson CX-10 is small. It’s even smaller than you think. The term “nano quad” was made to describe this tiny flying machine. Easily fitting in the palm of your hand (with room to spare) this little toy drone provides a surprisingly stable flying experience once you’ve mastered it, and is actually an ideal little toy with which to learn the principles of manual quadcopter control, without having to risk hundreds of $. It’s not a toy for younger children, though, as the learning curve with the CX-10 is quite steep, and anyone without much patience is likely to get frustrated quickly if they don’t have any other quad flying experience.

The CX-10 looks a little like a miniaturised DJI Phantom. In common with most nano quads the single double-sided circuit board forms the main structure of the aircraft, with a decorative/protective plastic shell fitted over. The aircraft is available in a wide range of colours (even pink!) and the plastic is of reasonable quality. These are mass produced by the thousands in China, and therefore there can be quality issues where motors have been misaligned or solder joints not made correctly – at the price point it’s inevitable that there will be a higher failure rate than for aircraft costing many times more.

The transmitter is very small and very cheap feeling, but that’s because it is both small and cheap. The supplied USB type charger is also cheap, and again some people have reported chargers being dead on arrival. Spares and replacement parts are readily available online, although most of them appear to come from Chinese wholesale websites rather than main retailers elsewhere.

The CX-10 is a ready-to-fly aircraft, and comes with everything you need to fly – charge the flight battery (takes about 15 minutes) and put 2x AAA batteries in the controller and you are ready to go. The aircraft will often need trimming initially to minimise any unwanted drift. If you have never used trims on a transmitter before this can take some getting used to, as can flying an aircraft with no compass or GPS to keep things steady.

With practice the aircraft can be trimmed fairly quickly and when trimmed is remarkably stable for such a small quad, although the gyros do drift a little over time, so you’ll probably need to add a notch of trim again from time to time before the flight’s over. The propellers are small and flexible, so they will take a fair impact before they become unusable, however the aircraft is susceptible to instability caused by bent or nicked props, so it’s worth getting several sets of spares and change your props out as soon as they become less than perfect to maintain performance

Like all fully manually quadcopters the CX-10 is not easy to fly. The transmitter will allow 3 different response settings, Beginner, Intermediate and Advanced – these affect how sensitive the aircraft is to control inputs and the maximum tilt angle the aircraft is capable of. Setting on the lowest level will help beginners who have a tendency to over-control. The yaw rate is surprisingly fast, and once you have the hang of it you can fly around your house with a pleasing level of accuracy. The aircraft is really only suitable for flying indoors, or outdoors with no wind. Even light breezes or updrafts will have a tendency to take the nano with them.

The aircraft can be made to perform a 360 degree flip or somersault by pressing down on a stick and then choosing which direction the flip should take place in by moving the stick quickly in that way. The aircraft can quite easily get sucked up onto ceilings by it’s own low pressure disc above the props, and it can also get caught in its own turbulent prop wash if you get too close to walls. The good thing about it being so light is that it is very crash resistant.

The aircraft has some bright LEDs which make it fun to fly at night, although they aren’t bright enough to light up the surroundings. The small motors and props spin fast and therefore the CX-10 makes quite a high-pitched “mosquito” wine when it’s flying which seems to particularly annoy pets.

The controller is very basic – on/off switch, 2 2-channel sticks and trim buttons. It uses 2.4GHz and has a range of no more than 50m in ideal conditions. It is powered by 2x AAA batteries.

The aircraft needs binding every time you switch it on, and this is achieved by switching the transmitter on, then the aircraft, then cycling the throttle from closed, to fully open and back to closed again. The LEDs on the aircraft will blink to show the bind is complete and then you’re clear to take-off.

The controls are not particularly responsive, although the unsprung throttle feels ok and allows reasonable fine control of height. The trim buttons are very “clicky” and the whole thing feels cheap. If you have large hands you might find it difficult to hold comfortably because it is very small. 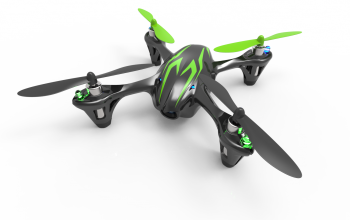 If you’re prepared to learn how to fly it, to put up with the cheap and small transmitter and the limitations on range and suitable flying locations, the CX-10 is a lot of fun. It’s cheap enough to be pretty much disposable and light enough that it survives seemingly heavy impacts and it crashes around the house. It does come with a full spare set of propellers, but it’s a good and wise investment to get hold of some more, as even the slightest bend or nick on a prop can make the aircraft unstable. You need patience and practice to get it flying nicely, but once you do there’s a big “grin” factor as you buzz around your house trying to fit it through small gaps and under tables, etc. The LEDs on the aircraft are surprisingly bright, and they flash to warn you that your voltage is low and it’s time to land for a recharge. Absolute beginners risk getting frustrated, as without any electronic tricks or GPS to do the hard work for you, it’s a real skill you’ll have to learn to get this to do what you want it to do consistently, so despite it’s toy size and toy price it’s probably not suitable for anyone under about 14 years of age.
7